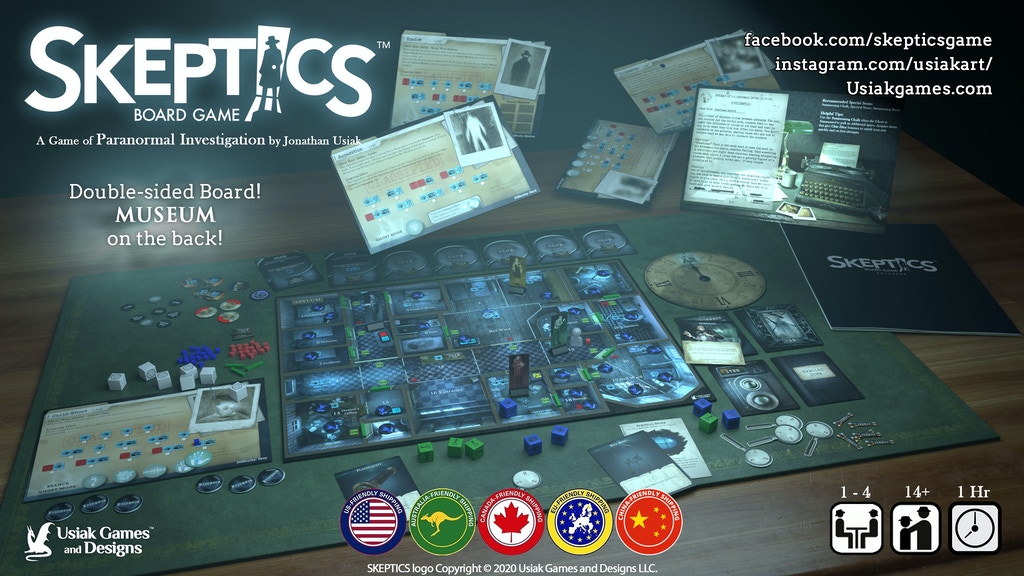 Created by Usiak Games and Designs

SKEPTICS is a cooperative, dice rolling game, where players explore potentially haunted locations to prove the existence of ghosts. 1-4 players take on the role of Investigators gathering evidence of the paranormal. Investigators race against the clock exploring rooms and rolling dice to match icon sets to Search, Reveal, and Solve Clues. Each Clue will lead Investigators one step closer to revealing the Ghost. Environment Cards are drawn every hour, which may have hazards and conditions that will impede the Investigators’ progress. Investigators win if the existence of the Ghost can be proven in time, but Investigators fail if time runs out.

Latest Updates from Our Project:

We had our First Stretch goal unlock overnight!. The Soundtrack! (actually two 'Soundtracks').

This idea came to us awhile ago at a convention, when we saw how engaged people were with the game. During game play, one player said to us how the game was so intense that they felt they were on an actual investigation themselves!  A mention of how all that was needed were sound effects of an abandoned spooky Asylum, and that is when the idea came.

So lately I have been working with an amazing sound designer who has worked on several commercials, music videos, and other sound design projects. We have a nice solid base to the one-hour track already, and over the next month or so we will be fine tuning the track so it has that perfect score as you play the game. We want the track to be spooky and mysterious, yet subtle and not overwhelming. It has to have that right atmosphere to make the experience even more immersive.

There will be two soundtracks available, which will have a link on a card that comes with the copy of the game. The tracks will also be downloadable.

Thank you very much Everyone! We would not have got this far without your support!


We just unlocked the Second Stretch goal! The ENTITY, which is a bonus expansion Ghost that is an addition to the Core game. You can check out a really quick How to Play Demo at this link: https://youtu.be/JFwp_YdOHC4

This Ghost comes with the first print run of the Core game!

The idea for this Ghost came from two Movies - The Raiders of the Lost Ark and (obviously) the Entity from the 80s. As I was watching Raiders, at the end scene with all the electrical impulses affecting the equipment, I thought that would be a neat idea for a Ghost. I had to then think of the name and type of Ghost this was going to be, and that is where the movie title of the same name helped. The Entity movie was mostly inspirational from a scene where they are glancing over a photograph of an electrical bolt. In the image was an apparent head and part of a shoulder. So I used that idea and created the image of the Ghost for this game.


I think it helps to share how my mind works as I am designing, just in case any of you out there are curious to how I come up with this stuff :)


Thank you everyone again for all the support so far! We are not even Half way yet! I could NOT have done this without you!

It has been a long day already, so we apologize for the extra emails! But our Tuesdays are our Give-away update days! Here are the current numbers so far:

As a reminder, you can still Subscribe or like any of the following to be part of the give-away during the Kickstarter run!

ALL the Details are in the Facebook page link below.


Also, if you are a Fan of the game you can go to Board Game Geek and like the page:   https://boardgamegeek.com/boardgame/199418/skeptics


Liking this page will help create that buzz!    Thank you everyone! YOU Made this happen! I am just the designer!

Hello everyone! There might be a few updates today, so I am apologizing Now for how many updates might come! We have a give-away update coming soon, and if we get a stretch goal unlocked, that will be coming as well!


So this Post is about the Very FIRST map design for this game. It was a Really quick Photoshop PROTOTYPE of the ASYLUM that I made in under an hour! We had an idea and I mocked something up really quick to start playing. I Actually had the dice made already so I could start playing right away!

And no, you will not be getting this crude map with the game! Hah!

I had to take this with my Phone because My Scanner is really making this come out dark (I think its on the Brink of dying).

Also. We had a few requests to see a better view of the Other side of the ASYLUM board - the MUSEUM! Here it is (reduced to 30%).

Once again thank you very much for getting us funded! Lots more time left to go!

We are less than 10% away from being funded. As a math nerd, I have been looking pretty heavily at the numbers and comparing our progress to the last Kickstarter, and it has been amazing to see the difference. So far for this campaign, we have averaged around $1,500 daily on days 3-6 as compared to the last campaign where we averaged around $250. If things continue with this trend for at least two more day, we may be funded tomorrow! We fully expect the trend will lower overtime, but we are really excited and optimistic that we will unlock some of the stretch goals by the end of the campaign.


We learned a lot from the last campaign and are still learning more this time around specifically about marketing. I found a really interesting YouTube video of a reviewer (Bower's Game Corner) that did a deep dive on our Kickstarter page; he was very open and blunt about some of the decisions we made. In many cases, he had valid points, and as a new designer, we are open to criticism because it helps us grow and become better.  We were able to make some changes based on some of the feedback we agreed with and were able to be changed at this point; you may have seen some changes if you looked at the page today. We love hearing your feedback both positive and negative so feel free to comment about how we are doing or private message if you are more comfortable with that. We can't change everything for this project, but trust me, Jon takes a lot of notes that will help our future projects. We are aware of some of the requests of the community and are already making plans on how to provide those the best we can.


While marketing has been our weakness, our strength has been focusing on making sure the game is ready to hit production shortly after the campaign. We will touch on that process in a future update.


Future updates will be a little more exciting with Jon providing images of cards that are in the game, early artwork, discussion about inspiration for the game and ghost, and more details about the stretch goals. Once we hit 100%, we will be sharing a preview of the Ghost that is unlocked in the second stretch goal.


Thank you all for your support of our project up to this point; we truly appreciate the feedback you have provided so far and what you provide moving forward. We have definitely been popping up in more discussion posts and videos than we did last time and much of that is thanks to you all who believe in our project. Hopefully our next update will be the news about hitting 100%!